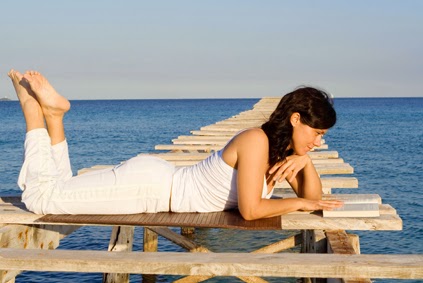 There are plenty of exciting new books coming out this summer.  Check out this list of the "29 Best Books of the Summer" compiled by the New York Post with help from Manhattan bookstores The Mysterious Bookshop and The Strand, Brooklyn's Word, and Amazon.

The list has everything from The Matchmaker--the newest from Elin Hildenbrand, the queen of the beach read--to literary heavyweight Haruki Marukami's new novel, Colorless Tsukuru Tazaki and His Years of Pilgrimage.

You may have read Jojo Moyes' wildly successful novel, Me Before You.  Her newest, One Plus One, comes out on July 1st, and is another contemporary opposites-attract love story.

Herman Koch's international bestseller, dark novel The Dinner, got people talking.  His new book, Summer House with Swimming Pool, which comes out this week, is another chilling story told by a questionable narrator.  A celebrity doctor is invited on vacation with a famous actor and his gorgeous wife, and somebody ends up dead.  This latest effort by Koch promises to be another controversial and thought-provoking novel.

Emily Giffin is known for chick lit, but her just released-novel, The One & Only, represents a departure for her as it deals with darker themes.  The plot revolves around a May-December love affair in which a 33-year-old woman begins to fall in love with her best friend's father and local football hero.

What books are you most excited to read this summer?
Posted by Elizabeth Oedel, Reference Librarian at Sunday, June 01, 2014 No comments:

Our Brookfield Library fiction discussion group will be reading THE CHAPERONE, an historical fiction book by Laura Moriarty, and meeting to discuss it on Monday, May 12 at 1:00 p.m.  We have a great group of about a dozen readers who always welcome new members, so if you're looking for a book club to join, plan to attend.  We should be getting in more copies later this week, and our books for discussion are located on a cart at the checkout desk.

"A New York Times bestseller, The Chaperone is a captivating novel about the woman who chaperoned an irreverent Louise Brooks to New York City in the 1920s and the summer that would change them both.

Only a few years before becoming a famous silent-film star and an icon of her generation, a fifteen-year-old Louise Brooks leaves Wichita, Kansas, to study with the prestigious Denishawn School of Dancing in New York. Much to her annoyance, she is accompanied by a thirty-six-year-old chaperone, who is neither mother nor friend. Cora Carlisle, a complicated but traditional woman with her own reasons for making the trip, has no idea what she’s in for. Young Louise, already stunningly beautiful and sporting her famous black bob with blunt bangs, is known for her arrogance and her lack of respect for convention. Ultimately, the five weeks they spend together will transform their lives forever.

For Cora, the city holds the promise of discovery that might answer the question at the core of her being, and even as she does her best to watch over Louise in this strange and bustling place she embarks on a mission of her own. And while what she finds isn’t what she anticipated, she is liberated in a way she could not have imagined. Over the course of Cora’s relationship with Louise, her eyes are opened to the promise of the twentieth century and a new understanding of the possibilities for being fully alive.

Drawing on the rich history of the 1920s, ’30s, and beyond—from the orphan trains to Prohibition, flappers, and the onset of the Great Depression to the burgeoning movement for equal rights and new opportunities for women—Laura Moriarty’s The Chaperone illustrates how rapidly everything, from fashion and hemlines to values and attitudes, was changing at this time and what a vast difference it all made for Louise Brooks, Cora Carlisle, and others like them."
Posted by Unknown at Monday, April 21, 2014 No comments:

I REMEMBER YOU: A GHOST STORY by Yrsa Sigurdardottir

Are you a fan of Scandinavian crime fiction?  If you haven't read anything from Sigurdardottir, give this a try.  One reader says this is one of the creepiest books she's ever read.

"In a departure from her series featuring lawyer Thora Gudmundsdottir, Iceland’s queen of suspense combines modern crime detection with mysticism to chilling effect. The sense of foreboding starts early, as married couple Katrin and Gardar, along with Lif, the widow of Gardar’s best friend, travel from Reykjavik to isolated Hesteyri to renovate the old house they’ve bought to turn into a guesthouse. Concerns about finances and the viability of the project pale as something about the house makes the trio want to leave it. Across the fjord, psychiatrist Freyr starts working with police on the unlikely connection between an elderly suicide victim and a six-year-old boy who disappeared three years earlier and was never found. Inevitably the two plot lines collide, revealing human behavior and failings—lies, betrayals, assaults, murder—that explain only part of what has happened from a time decades earlier to the present. Sigurdardottir skillfully builds the early ominous warnings to the point that readers find themselves shouting to Katrin to cut her losses and go home, as the unexplained becomes terrifying. Nordic mystery writers can raise goosebumps as few others can, and Sigurdardottir shows she’s one of the best."  ~ Michele Leber, Booklist
Posted by Unknown at Wednesday, April 16, 2014 No comments:

ASTONISH ME: A NOVEL by Maggie Shipstead

"In this exquisitely rendered story of love, loss, betrayal, secrecy, and artistic ambition, Maggie Shipstead takes hold of the reader and doesn't let go. "Astonish Me" is a haunting, powerful novel."
--Dani Shapiro

"From the author of the widely acclaimed debut novel Seating Arrangements, winner of the Dylan Thomas Prize: a gorgeously written, fiercely compelling glimpse into the passionate, political world of professional ballet and its magnetic hold over two generations. Astonish Me is the irresistible story of Joan, a ballerina whose life has been shaped by her relationship with the world-famous dancer Arslan Ruskov, whom she helps defect from the Soviet Union to the U.S. While Arslan's career takes off in New York, Joan's slowly declines, ending when she becomes pregnant and decides to marry her longtime admirer, a PhD student named Jacob. As the years pass, Joan settles into her new life in California, teaching dance and watching her son, Harry, become a ballet prodigy himself. But when Harry's success brings him into close contact with Arslan, explosive secrets are revealed that shatter the delicate balance Joan has struck between her past and present. In graceful, inimitable prose, Shipstead draws us into the lives of her lovably tempestuous characters. Filled with intrigue, hilarious satire, and emotional nuance, Astonish Me is a brilliant investigation into the bonds that hold us, despite the distancing of time and geography"
-- from the Publisher

WITHOUT WARNING by David Rosenfelt

A new standalone from David Rosenfelt, who writes the Andy Carpenter mystery series is just about to hit our new book shelf:  "Spooky. Creepy. Edgy. Shuddery. What more could anyone want?...Highly recommended for readers craving that elusive "something different.""--"Booklist"

Years ago, Katie Sanford’s husband was convicted of the murder of Jenny Robbins, then died himself in prison. It’s a small town and memories are long, and Katie and Jenny’s husband, Chief of Police Jake Robbins, have had to work at putting the tragedy behind them. But it's all brought up again in the wake of a hurricane which has just wreaked havoc on their quiet Maine town. Since its founding, Wilton has had a quaint tradition of creating a time capsule every fifty years, and the storm unearthed the most recent capsule. As the editor of the local paper, Katie joins Chief Robbins to supervise its opening. Neither of them is prepared for the macabre set of predictions, dating back to months before Jenny’s murder, that they find inside. Someone predicted her death, as well as eleven other tragedies, which are still occurring even long after the death of Katie’s husband.

At last, after all these years, Katie has reason to hope that her husband might not have been guilty of Jenny’s murder after all. But as she and Jake race to stop the next predictions from coming true, they find themselves caught in a terrifying mind game with no rules…and life or death consequences. ~ from the Publisher

Look for this one on our new book shelf next week.  And if you haven't read any of his other books, give them a try.  ~ Katherine
Posted by Unknown at Saturday, April 12, 2014 No comments:

UNTIL TUEDAY: A WOUNDED WARRIOR AND THE GOLDEN RETRIEVER WHO SAVED HIM by Luis Carlos Montalván

"A heartwarming dog story like no other: Tuesday, a lovable golden retriever, changes a former soldier's life forever. A highly decorated captain in the U.S. Army, Luis Montalvan never backed down from a challenge during his two tours of duty in Iraq. After returning home from combat, however, his physical wounds and crippling post-traumatic stress disorder began to take their toll. He wondered if he would ever recover. Then Luis met Tuesday, a sensitive golden retriever trained to assist the disabled. Tuesday had lived among prisoners and at a home for troubled boys, and he found it difficult to trust in or connect with a human being--until Luis. Until Tuesday is the story of how two wounded warriors, who had given so much and suffered the consequences, found salvation in each other. It is a story about war and peace, injury and recovery, psychological wounds and spiritual restoration. But more than that, it is a story about the love between a man and dog, and how, together, they healed each other's souls."  ~ from the Publisher

Luis Montalvan and Tuesday continue to share their story at appearances across the United States, in fact, they will be at the Norwalk Public Library in a few weeks. An amazing, powerful, and heartwarming story.  ~  Katherine

Reading for the New Year

So many things in today's world get in the way of sitting down with a good book--computer time (thinking Words with Friends), television watching (catching up on that television series everyone is raving about), chores.....so this year may be the one to head back to the pleasures of reading.

Besides, we've all heard that reading can be a great stress reliever, right? And we all need that, agreed? Simply by opening a book, reading can  relax your body by lowering your heart rate and easing the tension in your muscles, by up to 68% according to a 2009 study at the University of Sussex  It works better and faster than other relaxation methods such as drinking a hot cup of tea or listening to music.

So, no hard and fast resolutions here.  But it would definitely be lovely to read more for pleasure, and to read more books outside the usual choices (for me that would be more nonfiction).  Maybe more of a different genre, maybe some of those books that have been sitting in the TBR pile forever.  And, a good year to catalog and rate ALL the books read in 2014, either on GOODREADS or LIBRARY THING or SHELFARI.

If one of yours is to join a book group, think about the offerings at your library.  Here at Brookfield, we have at least three a month:  Brookfield Reads Fiction, Book 'Em Mystery Group and Nonfiction Book Club.  And every few months we have a Cooking the Books get together, where we enjoy good book conversation and great food! Think about coming to one or more of our meetings--we love having new readers join us.

Do you have any reading resolutions for 2014?